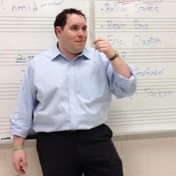 Mr. Abrams
Jon Abrams is the director of the choral program at Hingham High School and he's in charge of the fifth grade choruses as well. In addition, Mr. Abrams teaches a half-year elective on the Evolution of Rock. Prior to teaching in Hingham, Mr. Abrams taught at the Nissitissit Middle School in Pepperell, MA; the Estabrook Elementary School in Lexington, MA; the Bailey School in Lowell, MA, as well as teaching summer programs in theory/composition and music technology at Lawrence Academy in Groton.

Mr. Abrams grew up on the north shore of Boston and attended Lawrence Academy where he first fell in love with the music of Billy Joel. It was also at Lawrence where he first learned the intricacies of music composition and recording techniques while studying with Peter Hazzard. After graduating from Lawrence Academy in 2001, he attended Allegheny College in Meadville, PA where he served as music director for the Academy Theatre and choir director for the Unitarian Universalist Church. It was in Meadville where he fell in love with choral music while singing in the college choir and chamber choir and studying choral conducting all under the direction of Dr. Ward Jamison. For his senior thesis, Mr. Abrams wrote, rehearsed with a volunteer chorus of his peers, and performed an original major work, Missa Brevis in Four Styles. Each of the four movements were written in a different musical style ranging from gregorian chant to a lush romantic-era piece. 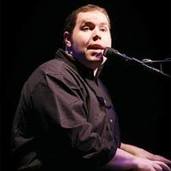 Movin' Out, 2008
Mr. Abrams has also had an illustrious performance career including several solo national and international tours as well as having starred in Billy Joel's tony-award winning "Movin' Out" on the national Broadway tour. He runs a Billy Joel tribute band called The Strangers. His favorite part of this band is that Billy's original guitarist, David Brown, is the guitar player in The Strangers. Kind of ironic actually...whenever a signature guitar solo comes up, it's the very same musician heard on the original record paying tribute to his own lines heard on Billy's classic recordings.

Besides playing Billy Joel songs, Mr. Abrams has also toured as a solo pianist/vocalist in cities around the country and around the world. After having traveled hundreds of thousands of miles in pursuit of musical, professional fulfillment, he's found that his dreams are most realized in his position at the head of the class. For all the places he's played, the people he's met and the memories he's made, nothing compares to forming relationships with students and their families, watching and hearing them grow musically, and inspiring them to be active musicians as they progress through the stages of their lives.

When he's not teaching, he plays in the Boston-based band: Rare Form.
Powered by